The phone rang at Joanne Dowd’s home in Delaware on Oct. 26, 2015, with the news every military mother dreads: Her son, Brian, a U.S. Army Special Forces officer, had been severely injured where he was stationed on temporary duty in Germany. A German civilian had miraculously spotted Brian’s injured body, and called for emergency medical care.

What actually happened to Brian remains unclear, but he had multiple fractures, a collapsed lung and was in a coma with a severe brain injury. When a military surgeon later called to provide Joanne, a retired nurse, with medical details, she said, “He was very clear on the dire nature of Brian’s condition.”

And just like that, Joanne, her husband, Kevin, and Brian’s wife, Gina, found themselves navigating a whole new world, half a world away.

Praying for a Miracle

Joanne and Kevin flew to Germany from the East Coast, and Gina traveled from her home in Colorado, with her infant daughter, Maeve. Family and friends including Gina’s Mom, Debbie, rallied around to care for Gina and Brian’s older kids, Mia and Joey. And everyone began praying for a miracle.

The Dowds did not know what to expect. Joanne said, “Brian was in really, really bad shape.” But after a few days of what she described as “one miracle after another,” Brian became stable enough to be flown from Landstuhl, Germany, to Walter Reed Medical Center in Bethesda, MD.

Joanne remembers watching her son transferred onto a C-17 military transport airplane with a handmade American flag patchwork quilt covering his stretcher. Brian’s flight nurse said to Joanne, “I have three little boys at home. Until we get your boy to Walter Reed, he is my son.”

Within 24 hours of arriving at Walter Reed, Brian was breathing on his own and starting to emerge from his coma. His medical team kept saying this really shouldn’t be happening with the extent of Brian’s injuries. But it was.

Joanne said she marveled at the care and attention both Brian and his family received at Walter Reed and from the Army’s Special Forces Support Team and Wounded Warriors who were on hand to help. “The level of dedication and commitment was amazing,” she said.

After nine days at Walter Reed, Brian was transferred to the Polytrauma Rehabilitation Center at Hunter Holmes McGuire VA Medical in Richmond, VA, a model treatment center for service members with multiple traumatic injuries. He was admitted to their coma-emergence program.

Over her own 42-year career in nursing, Joanne said she had never witnessed such amazing care by a medical team. “Every single discipline was so focused and caring and committed,” she said. “All the staff was hopeful and so inspiring. Just being on the unit was good therapy for all of us.”

Joanne had kept a journal  since the day she got the call about Brian’s injury. But while staying at Fisher House in Richmond, a home away from home for families of service members receiving care at VA Medical Centers, she launched a CaringBridge site.

Brian was moving out of a daily emergency mode toward a new normal, and with family and friends around the globe asking for updates, Joanne said CaringBridge was a perfect platform for communicating.

Joanne was the main writer on Brian’s CaringBridge site, as Gina had her hands full with an injured husband and an infant. “Instead of writing in a journal, I wrote posts on CaringBridge once everyone was asleep,” Joanne said. “It was a wonderful process because it helped me stay in the positive, hopeful space I wanted to inhabit. I felt like my job was to try and stay in a positive, solid place. For Brian. For Gina. CaringBridge became my anchor.”

Brian spent the next three months recovering from his injuries, and he had to re-learn all of the skills of daily living. Joanne and Kevin were able to provide daily support while Gina and Baby Maeve flew back and forth between Colorado and Virginia.

Mia and Joey were able to be with the family in Virginia over Christmas week, and the positive impact they had on their Dad’s recovery was noticed by everyone.

The Fisher House was a wonderful place for the entire clan. Brian’s sisters and their families, Gina’s mom and brother and girlfriend … all 20 people to gather and celebrate the holidays. Their presence, love and support really helped Brian’s recovery process.

Now home and with his health restored—another miracle—Brian is medically retired from the military, and is working in a job that uses skills acquired in the Army.

“They’re making a whole new life,” Joanne said. “He talked in the hospital that this was ‘Brian 2.0.’ It has been a challenging four years, but his family is in good place.”

Joanne said Brian has read parts of his CaringBridge Journal, but she finds it hard to look back at how scary those early months were. “We didn’t know if Brian would recover, or what recovery might look like,” she said. “Having the support of everyone around us and on CaringBridge made our faith and hope stronger. It made it possible for us to believe that miracles happen.”

Through a partnership between the VA and CaringBridge, Veterans, service members and their family caregivers everywhere are finding in CaringBridge a place of help, hope and healing. If you know a military family that needs CaringBridge, share this article or invite them to check out the special homepage for those who have served.

Caption for Main Photo: Brian and Gina Dowd, shown with their kids on Easter 2019, faced challenges no family ever imagines after Brian suffered a traumatic brain injury in 2015. 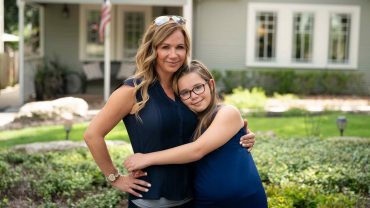 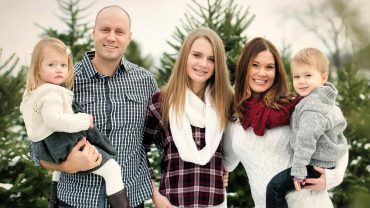 Remembering a Wife, Mom and Woman Who Served