By age 36, Amie Dahl-Muller of Woodbury, MN, was many things: A U.S. Air Force and Minnesota Air National Guard veteran, mom of three, wife, volunteer, activist—and a woman diagnosed with Stage III pancreatic cancer. Before her 37th birthday, she was gone.

By all accounts, Amie made the absolute most of her too-short life. Deployed twice to Balad Air Force Base in Iraq, as an airman with the Duluth, MN-based 148th Fighter Wing, she monitored and edited video footage gathered by F-16 pilots to identify possible roadside bombs.

Back home, she worked at the Minnesota Army and Air National Guard command, where she designed a series of commemorative license plates for Gold Star families who lost loved ones serving on active military duty. She also created a program to videotape the funerals of Minnesota veterans killed in action, as a keepsake for their families.

A Force of Nature, Too

Amie’s husband, Brian, said his wife was a force of nature, always leaving things better than when she arrived. She had always felt there was no situation impossible to conquer, including a diagnosis of cancer that came in April 2016, two days after her 36th birthday.

The diagnosis came three years after the onset of chronic fatigue, body aches and migraines; unusual symptoms for a young woman who had always been strong and healthy.

Amie had been deployed near burn pits in Iraq, and she wondered whether exposure to toxic smoke had caused her cancer. Her passion for raising awareness about these burn pits attracted attention from the media, and also U.S. Sen. Amy Klobuchar (D-MN), who began following Amie’s story.

“Amie was fighting two fights,” Brian said. “She was raising awareness of the effects of the burn pits on vets, and she was fighting her own illness.”

Brian said CaringBridge helped on both fronts. “CaringBridge was a huge thing for us. Amie was a very social person, but when she was sick it was hard to have people around. But she did want people to know what was going on.”

She kept family, friends and those with whom she served updated through 10 months of brutal cancer treatment.

“If you take a penny-sized bit of this chemo all at once, it could kill you,” Brian said. “And we were pumping that into Amie. But she had no fear. She would say, ‘Hook me up, let’s do this.’ I never would have been able to do what she did, and with so much courage.”

The Mullers had hoped for surgery to follow after Amie’s rounds of chemo, but unfortunately her cancer had spread.

“I remember hanging on to Amie’s hand and she started shaking,” Brian said. “It was the worst news possible. We knew that Christmas would probably be our last.”

By January 2017, Amie’s physical pain was agonizing. Enroute to the hospital for a procedure to give her some relief, a blood clot went to her leg.

“She got out of the car, and noticed her foot hurt really badly,” Brian said. “She pulled up her pant leg and her whole leg was black and blue.” On Feb. 18, 2017, after liver failure, jaundice and a stroke, Amie died.

Brian and Amie met because of her love for honoring those who served.

“We met at a concert and struck up a conversation,” Brian said. “She asked me to write a song for memorial DVDs she was creating for Gold Star families. I wrote something called ‘Falling but not Forgotten,’ and she used it on the DVD. I never imagined that song would be played at her funeral, with a montage of her photos.”

But it was also a reminder for Brian that songwriting could be a way to channel his family’s grief.

“I think I wrote about 50 songs about grief and loss during the first 6 months after Amie died,” Brian said. Their son, Jace, then 5, helped him write one called “Ladder to the Sky.”

“I decided early on that you can’t put a timeline on grief,” Brian said. “I had to figure out how we were going to thrive through this. I was going to be the best dad I could. I took a lot of time off work to make sure I was there for my kids.”

Brian journaled daily, went to therapy and used therapeutic tools such as Eye Movement Desensitization and Reprocessing (EMDR) to help manage PTSD associated with his grief.

He and the kids, Caidyn, Jace and EmmyLu, talked about Amie every single day, cried together and watched videos of her. Brian said he did not shy away from any questions the kids needed to ask.

He also set up the Amie Muller Foundation.

Brian is thankful for the resources his family had through Amie’s illness: She had good health insurance, he had a good job, people were so generous with their time and kindness.

But as he knew some had fewer resources, Brian wanted to honor Amie’s legacy by supporting other military families going through pancreatic cancer. Early on, he made connections through CaringBridge and GoFundMe, but said it was sometimes difficult to approach as an individual.

“Some people thought it was a scam or didn’t respond,” Brian said, laughing at the memory of calling strangers with a gesture of financial support. “Sometimes I’d wire them $50 to show I was serious.”

Brian also said that working with families was causing him to re-live Amie’s suffering. So he knew it was time to formally establish a foundation.

“I went to church one day and I remember the pastor saying, ‘Whatever pain you have in your life, you need to find a way to use it.’ It hit me: I knew a foundation could help support families who didn’t have the network or financial resources that we had.”

So the Amie Muller Foundation became a nonprofit, raising money through an acoustic music showcase, a family fun day at Mall of America and other donations. Since launching in 2017, the foundation has raised more than $100,000 to help support 19 families with resources, education, advice and a financial stipend, based upon need.

And thanks to Amie’s advocacy, a bill passed the Senate in 2018 to create a Center of Excellence at the U.S. Department of Veterans Affairs to study the effects of burn pits on military members, with the hope of improving safety and ensuring needed treatment. Also, the sharing of her story brings visibility to the VA’s Airborne Hazards and Open Pit Registry, which allows eligible veterans and service members to document their exposures and report health concerns through an online questionnaire.

Brian said, “Amie’s life meant something. It was part of God’s plan … not that anyone would ever want a 36-year-old mom to die of cancer. But something greater has happened because of it. Not a day goes by that we don’t think about Amie.”

Through a partnership between the VA and CaringBridge, veterans, service members and caregivers everywhere are finding in CaringBridge a place of help, hope and healing. If you know a military family that needs CaringBridge, share this article or invite them to check out the special homepage for those who have served. 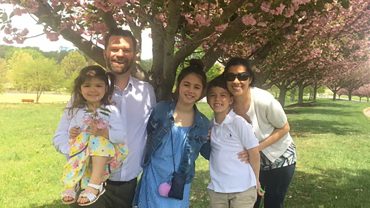 CaringBridge Was an Anchor for Mom of Wounded Soldier

Jeff Edwards: Do the Best You Can, With What You Have 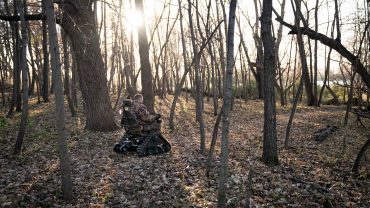