I am a spiritual caregiver who had a client, Sara, who let her Stage 1 breast cancer grow over four years before she sought pastoral counseling to decide if she should seek medical treatment.

Sara had religious reasons for resisting medical treatment; she believed faith and prayer would heal her. Coincidentally, I met Sara as I was worked on my doctoral dissertation, using the works of Buddhist nun Ayya Khema, who also on religious grounds let her cancer grow for several years without treatment, and the works of poet/essayist Audre Lorde, author of The Cancer Journals and A Burst of Light.

The near-synchronicity of Sara, Khema and Lorde’s influences led me to wonder about the impact of religious and spiritual beliefs on women seeking cancer treatment—or avoiding conventional treatment altogether.

I have come to believe there are gaps in the spiritual-care continuum that a pastoral counselor can fill among women living with, but not receiving conventional treatment for cancer.

This belief has been substantiated through a Women, Spirituality and Cancer (WSC) pilot study I conducted in 2020 with United Theological Seminary of the Twin Cities and CaringBridge, which participated through its research collaborative, an entity created to advance a framework for healing for patients and family caregivers.

The WSC study consisted of an online survey of 37 questions and 12 interviews. Participants were recruited through social media, email and an invitation on the CaringBridge homepage posted between April 6-30, 2020. In total, 248 women in the United States participated in the survey. 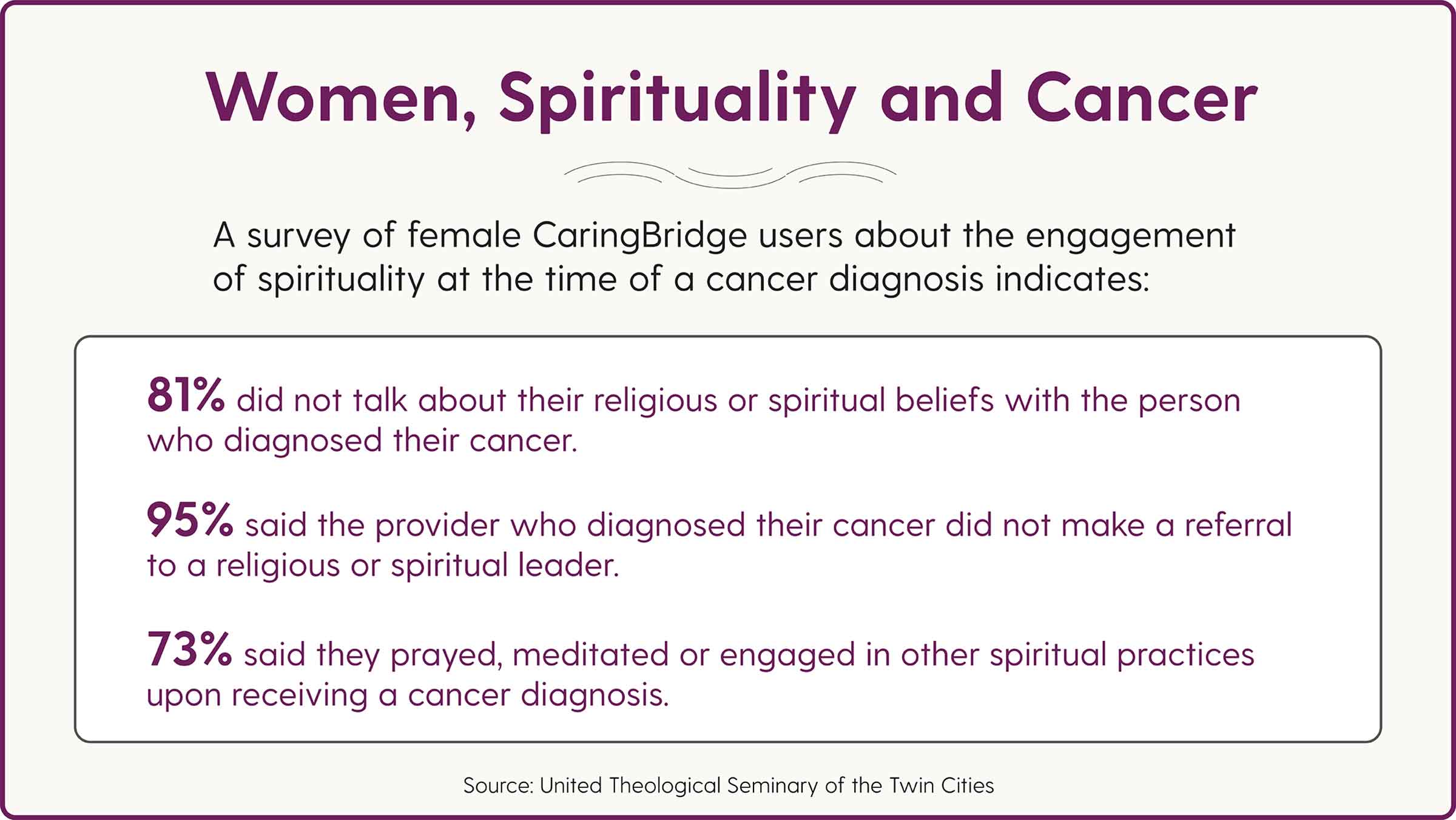 ‘Who Diagnosed Your Cancer?’

One of the survey questions was, “Who first diagnosed your cancer?” As anticipated, a significant percentage (27.5%), answered “oncologist.” But the majority (33.75%), answered, “other.”

For example, we learned in at least three interviews, one with a Buddhist, one with a Baptist, and one with a fluid spirituality, that they called on friends within their spiritual and secular communities who had been through cancer, to spiritually accompany them as they were making decisions about treatment.

Spiritual friendship is a key resource for women with cancer who belong to permissive religious and spiritual communities. But for women like Sara, whose religious tradition prohibits conventional medical treatment, friends who are affirming, educated and spiritually skilled may be difficult to find.

Research also confirmed that many women who claim a spiritual or religious life tended not to discuss their beliefs and practices in a clinic setting, unless asked by their doctor. Survey responses also indicated that doctors seldom asked.

Eighty-one percent said they did not talk about their religions or spiritual beliefs with the person who diagnosed their cancer, and 94.96% said their diagnosing clinician did not refer them to a religious or spiritual leader.

We conclude, preliminarily, the following:

The data also show that women use their spiritual, religious and worldviews to make decisions about cancer treatment. When asked the question, “When you learned you had cancer, did you pray, meditate, ask, or chant for a cure?” 73.42% said answered, “yes,” 18.57% said, “no,” and 8.02% said, “other.”

The “other” included praying for health, well-being, courage, stamina to heal, wisdom, strength, guidance for doctors, a long life, and for God to use cancer for his purpose. Respondents also prayed to stay present for what was unfolding, to hear what God had to say, and for compassion if this was “it” for them.

Women also cited taking walks, talking with a non-religious spiritual mentor and meditating for acceptance, coping and dealing with the effects of cancer treatments. Also mentioned was the practice of tonglen, a Tibetan meditation that includes visualizations of breathing in suffering and breathing out relief.

In essence, 81.44% of survey participants said they used spiritual practices when they learned they had cancer.

Don’t Repress Your Spiritual Self

Data confirm gaps in the spiritual-care continuum for women with cancer. So how can these patients show up more fully, using their religious beliefs, spiritual lives and practices to inform decisions about life, illness, treatment and death? How can resistance, repression and self-sabotage be avoided?

One way is to recognize why and when we repress our spiritual selves.

They may have spiritual friends, but it is unlikely these friends are skilled in working with resistance. Also, as in Sara’s case, it was difficult to talk about resisting one’s faith without fear of being ostracized within their religious community.

Women like this are caught between choosing biological life and losing the community that provides their spiritual life. Where can they turn for help?

Theoretically, they can see a pastoral counselor, pastoral psychotherapist, secular psychotherapist or a skilled spiritual friend. But women considering medical treatment outside their religious traditions need particular support to resist self-sabotage. It can be difficult to reconcile such feelings as “you’re unworthy,” “this is your fault,” and “you deserve this.”

Until the secular medical establishment changes, and until women recognize resistance, repression and self-sabotage, gaps in the spiritual-care continuum may remain.

An unfortunate outcome is that when conversations about spiritual care between clinicians and women with cancer don’t happen, there can be life-threatening delays in receiving medical care.

This pilot research project was inspired by three women whose thoughts on religion affected their decisions around cancer care. The data demonstrate that many women do not bring their full selves to oncology care.

Women May Use Their Own Power

There are intrapsychic dynamics at play where resistance, repression, projection and self-sabotage prevent women from fully showing up in their own medial care. Spiritual friendships outside the clinical setting provide support, but more research is needed to determine the quality of those spiritual friendships.

Until religious and spiritual conversations become best-practice for diagnosing clinicians, more women will need to choose to use their own power to create the kind of doctor-patient relationship they desire and deserve.

Pamela Ayo Yetunde, J.D., M.A., Th.D., is a pastoral counselor, co-founder of Center of the Heart and founder of Audre: Spiritual Care for Women With Cancer, which was created as an outcome of this research project. She previously was a professor at United Theological Seminary of the Twin Cities, and is author of books including Black & Buddhist: What Buddhism Can Teach Us About Race, Resilience, Transformation and Freedom.

Pamela Ayo Yetunde, J.D., M.A., Th.D., is a pastoral counselor, co-founder of Center of the Heart and founder of Audre: Spiritual Care for Women With Cancer, which through which she worked with the CaringBridge Research Collaborative on a study of spiritual support in clinic settings among women with cancer. She is author of books including Black & Buddhist: What Buddhism Can Teach Us About Race, Resilience, Transformation and Freedom. 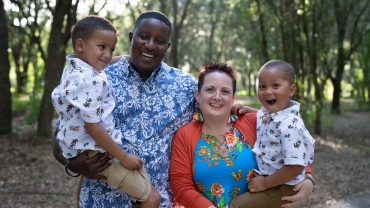 A ‘Hakuna Matata’ Hope for Healing After Breast Cancer 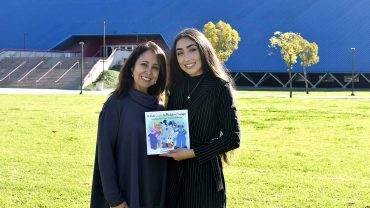 Radiation Through a Child’s Eyes: 3 Questions With Giovanna Quevedo 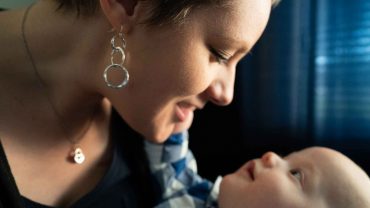